Among those joining them at the Dallas County Courthouse was none other than president George W. Bush.

Unfortunately, the former commander-in-chief was unable to serve on this occasion, as the jury was filled by other members before his turn to enter the courtroom for consideration.

W wasn’t selected for the final jury – but that was nothing to do with his high profile.

The Dallas Morning News reports that Bush was summoned for jury duty, and was at the George Allen Courthouse from 8:50 a.m. until about noon on Wednesday.

Secret Service was present around the building for three hours while the 43rd president was there.

Another potential juror said he was surprised to find the former president right behind him at the 14th civil district court.

One of many jurors, Sheri Coleman, advised that Bush was “very personable, very pleasant”. “I loved it”.

And he answered the call in 1996 when he was governor of Texas – but was excused from the jury on the grounds that his power to grant pardons would cause a conflict. 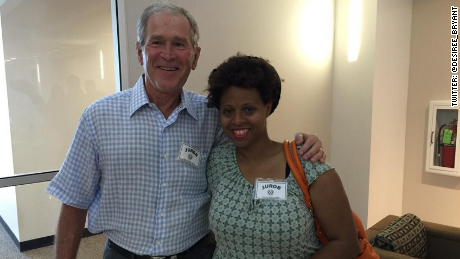